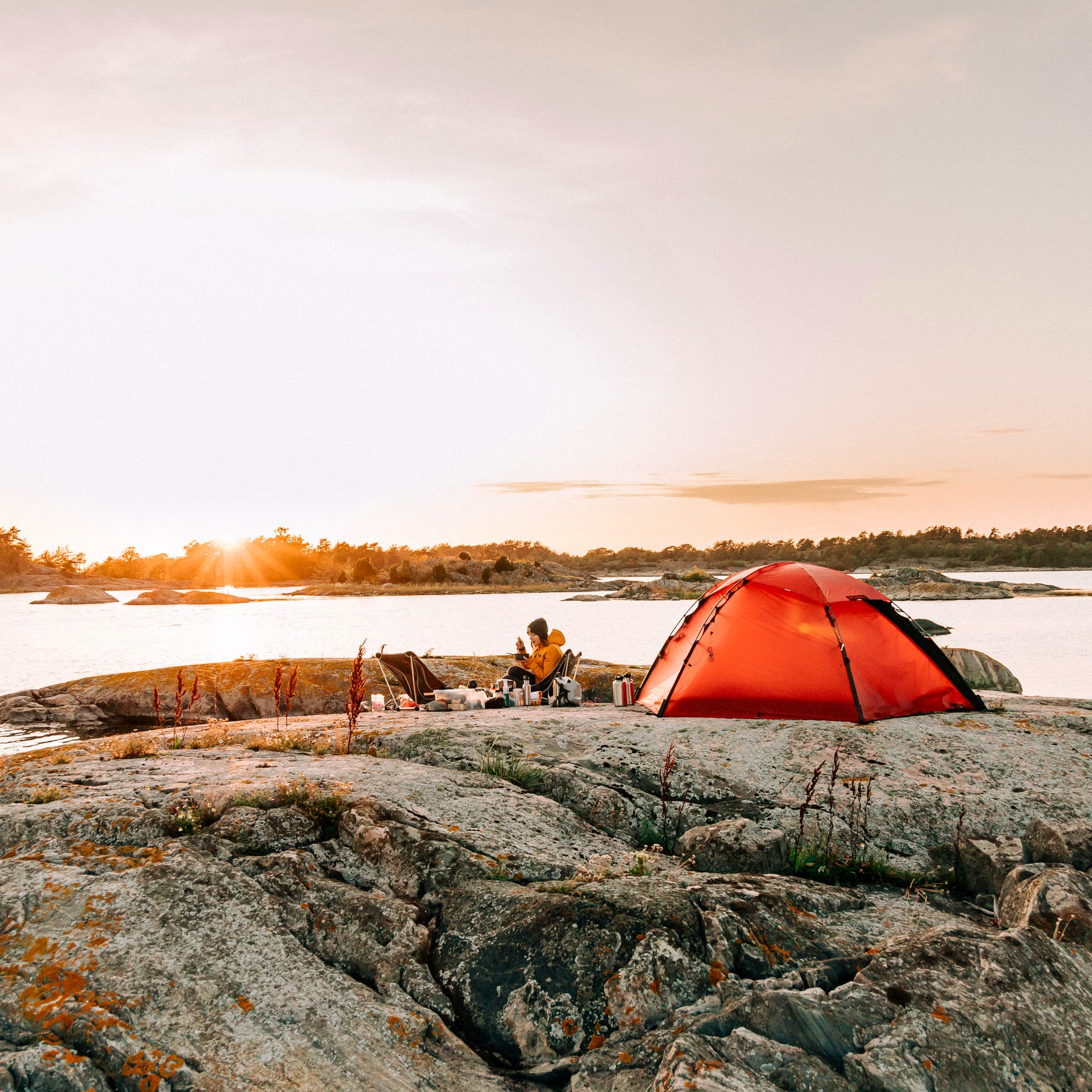 Saint Anna Archipelago is made up of over 6,000 islands, most of them tiny and uninhabited. Situated on the east coast of Sweden, it’s a fantastic location for beginners or experienced sea kayakers with a thirst for adventure.

Book confidently, knowing that if your trip is cancelled, you’ll be offered a full refund.

You can also opt for a free date change at any point up to 24 hours before your trip, if Government restrictions prevent you from travelling*.

Day 1: Into the maze

We'll pick you up from Norrkoping train station at 10am (1h 45 min from Stockholm).

From there we'll head to your start point, where you'll be given all your pre-ordered food, equipment and a full briefing on safety, navigation and the area.

You can choose whatever route you like over the next 5 days!. You may begin by paddling northeast towards Aspöja - through clusters of forested islands with white-tailed eagles famously soar high up in the sky. Continue paddling through the Uggelholmarna Nature Reserve, where three-hundred-year-old pine trees grow. It's the perfect place to get out for a short wander and a coffee break.

In the afternoon you'll reach the islets south of Aspöja - where you can set up your tent on any island of your choosing, and enjoy the sunset! It's arguably one of the archipelago's most beautiful settings. 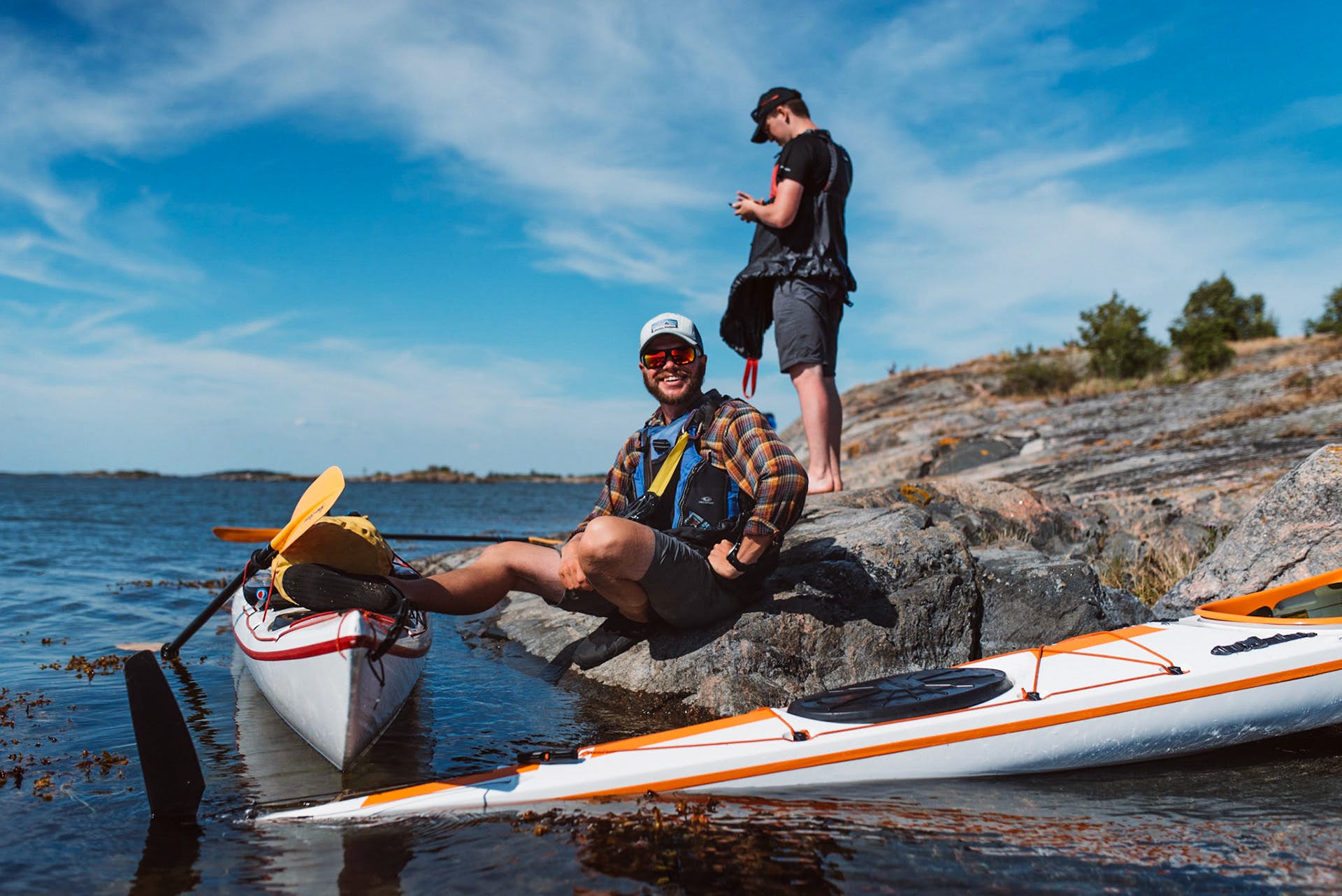 Day 2: A band of islands against the horizon

Today is an absolutely stunning route southeast through the outer Archipelago. Begin by heading east past the bird sanctuaries around Torrskär. Large colonies of Herring gulls and Oystercatchers breed out here.

Continue your expedition southward through the Missjö Archipelago, a long band of islets and skerries bordering the open sea stretching over ten kilometres. The blue horizon is your backdrop and it’s so beautiful out there!

Towards the end of the day, you'll reach one of the most famous points of interest in Saint Anna - the old navigation point at Kupa Klint. It’s a fantastic lookout with spectacular views of the archipelago spreading out below. A little further west you'll find a rustic pub (reservation only) run by local boat taxi man Mats. He's a great host and it's always a fantastic time dining here. 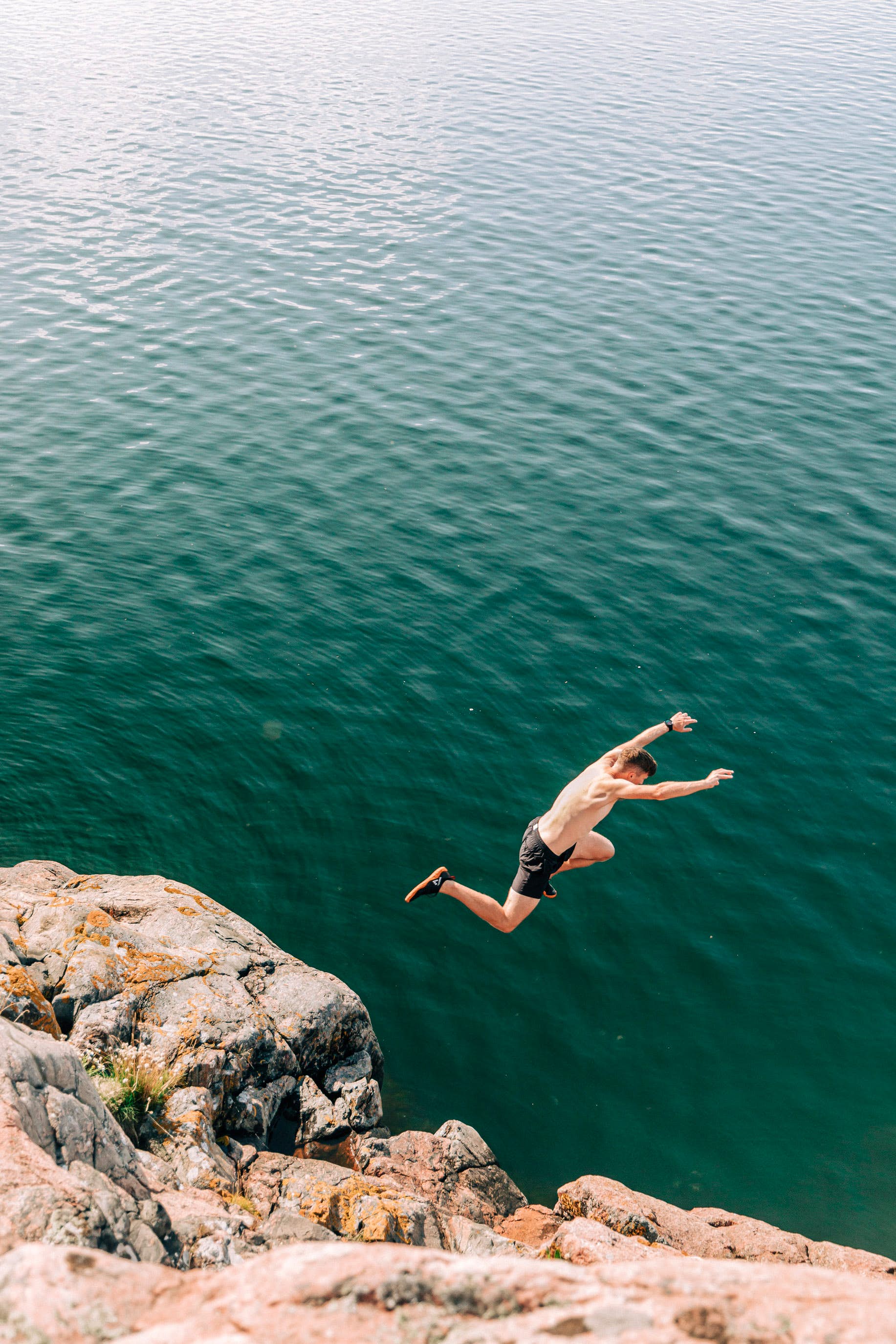 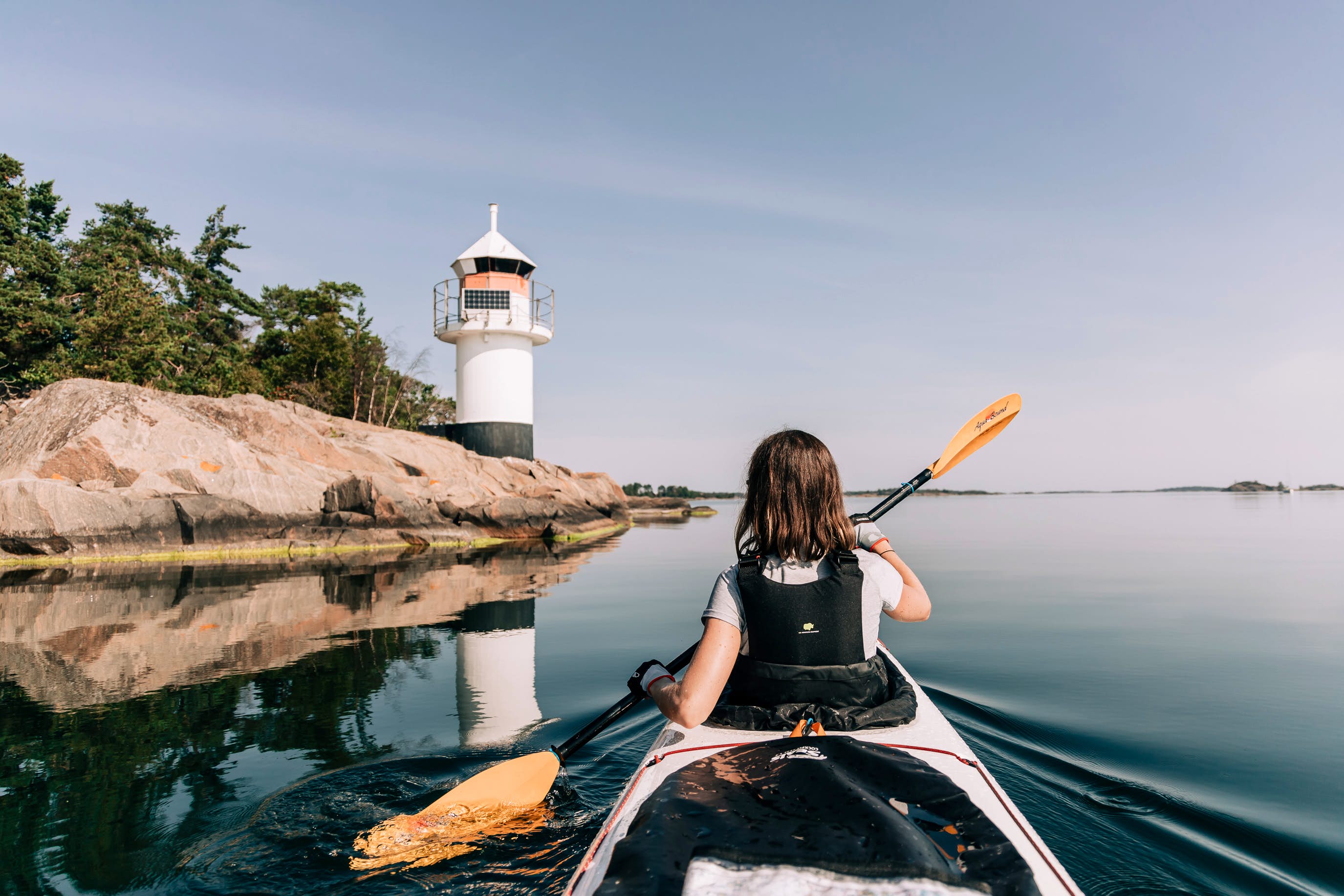 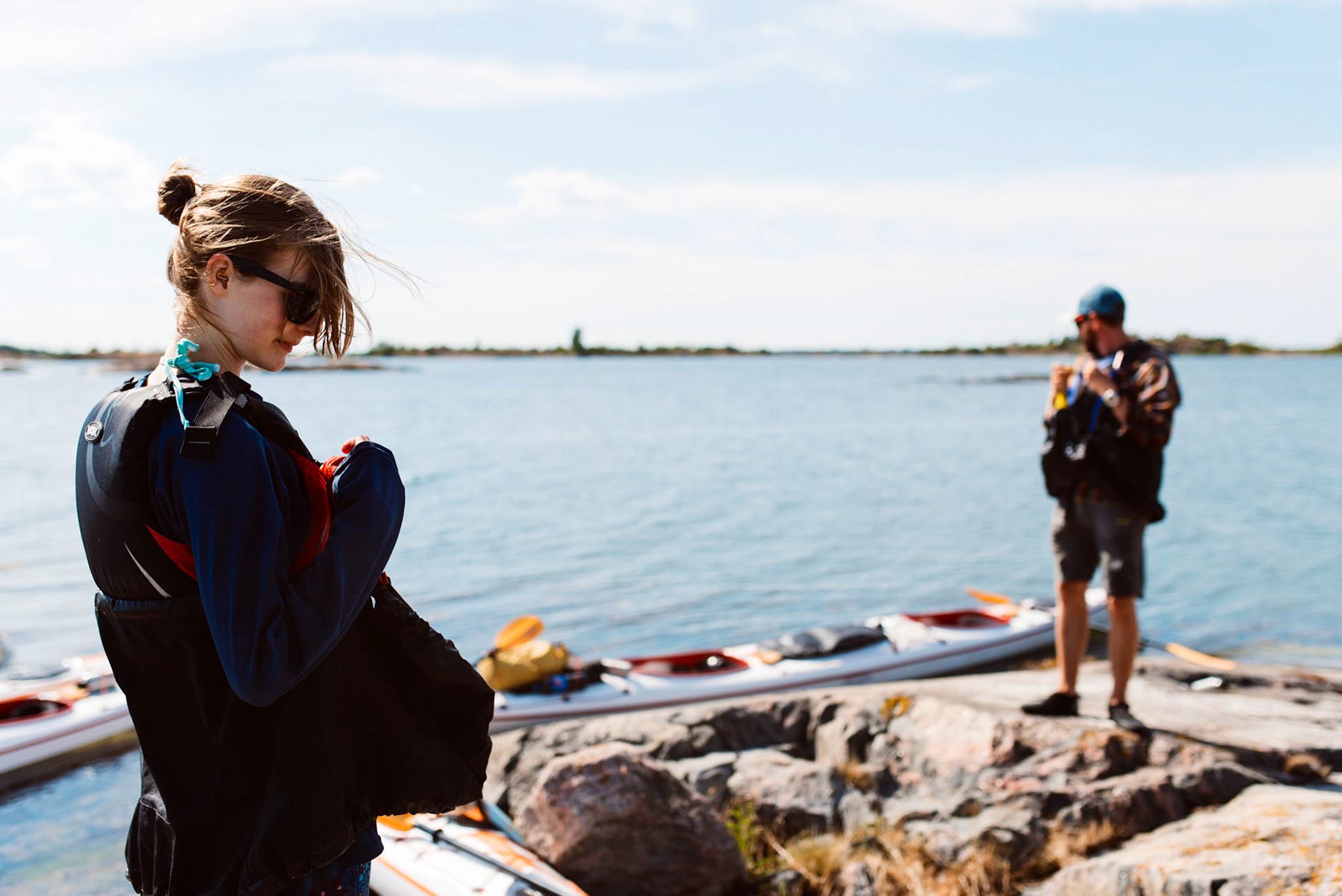 Day 3: The village that time forgot

Steer your kayak south towards the most visited island in the area – Harstena. An idyllic view of the village greets you as you paddle the narrow inlet. Harstena is famous for its picturesque and historic beauty. Learn more about the history of the village at the museum in the old school, munch on delicious cinnamon swirls from the bakery and treat yourself to a meal of delicious Archipelago cuisine at the water-side restaurant.

A short paddle west takes you to Torrön - a beautiful sheltered area with shallow waters, smooth rocks and calm creeks – great for swimming and sunbathing in warmer temperatures. 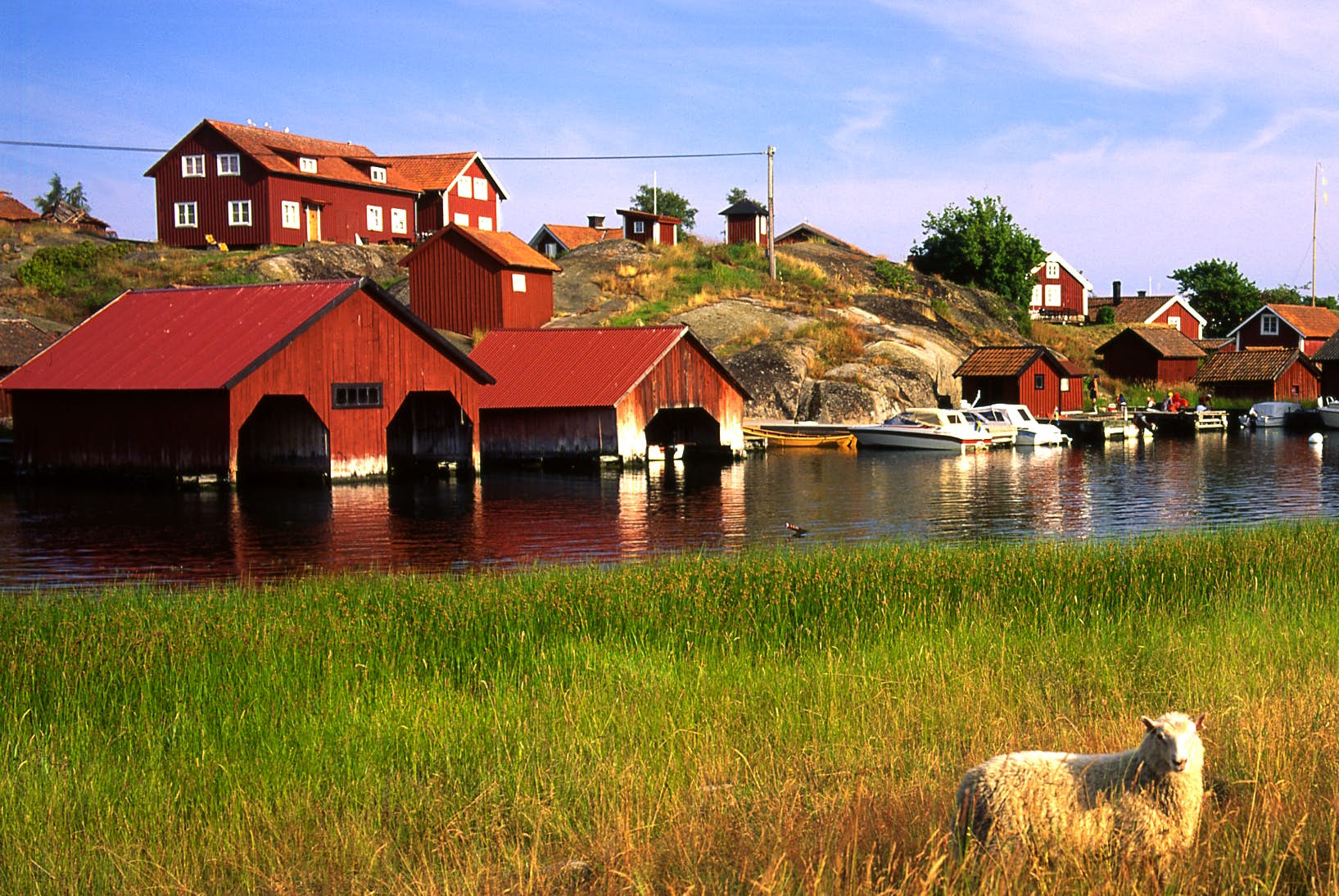 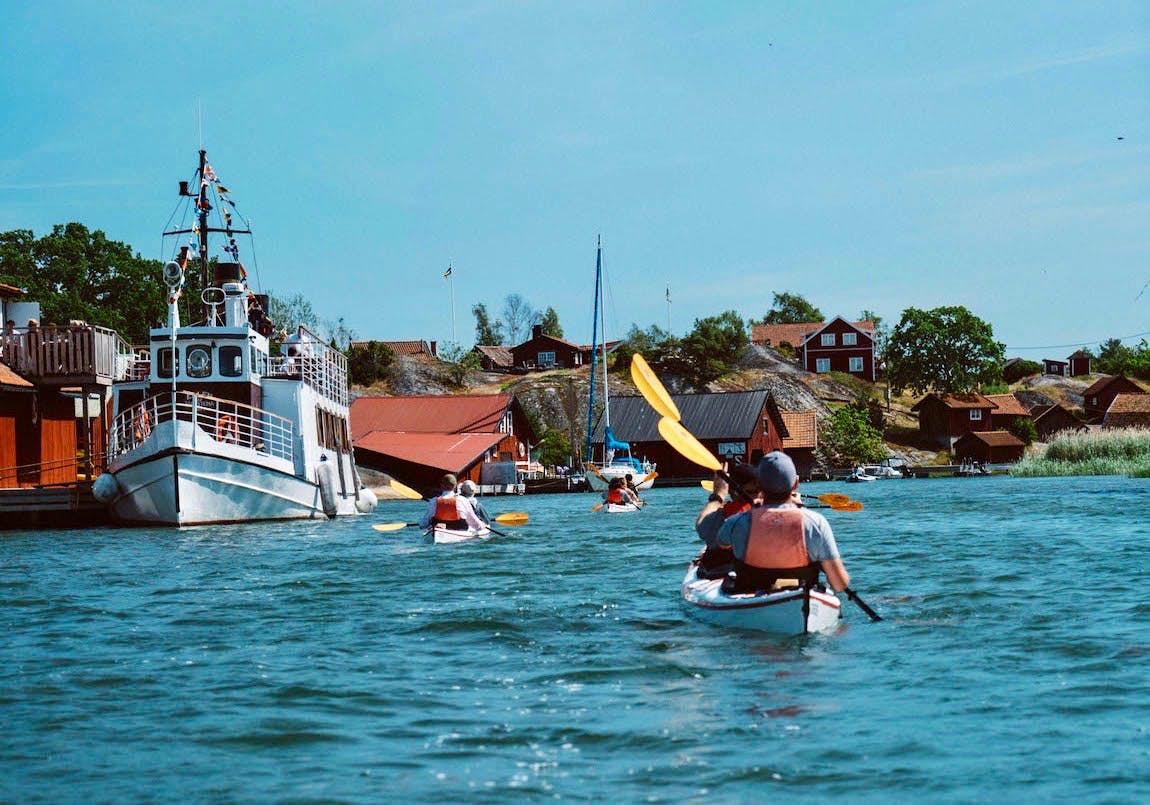 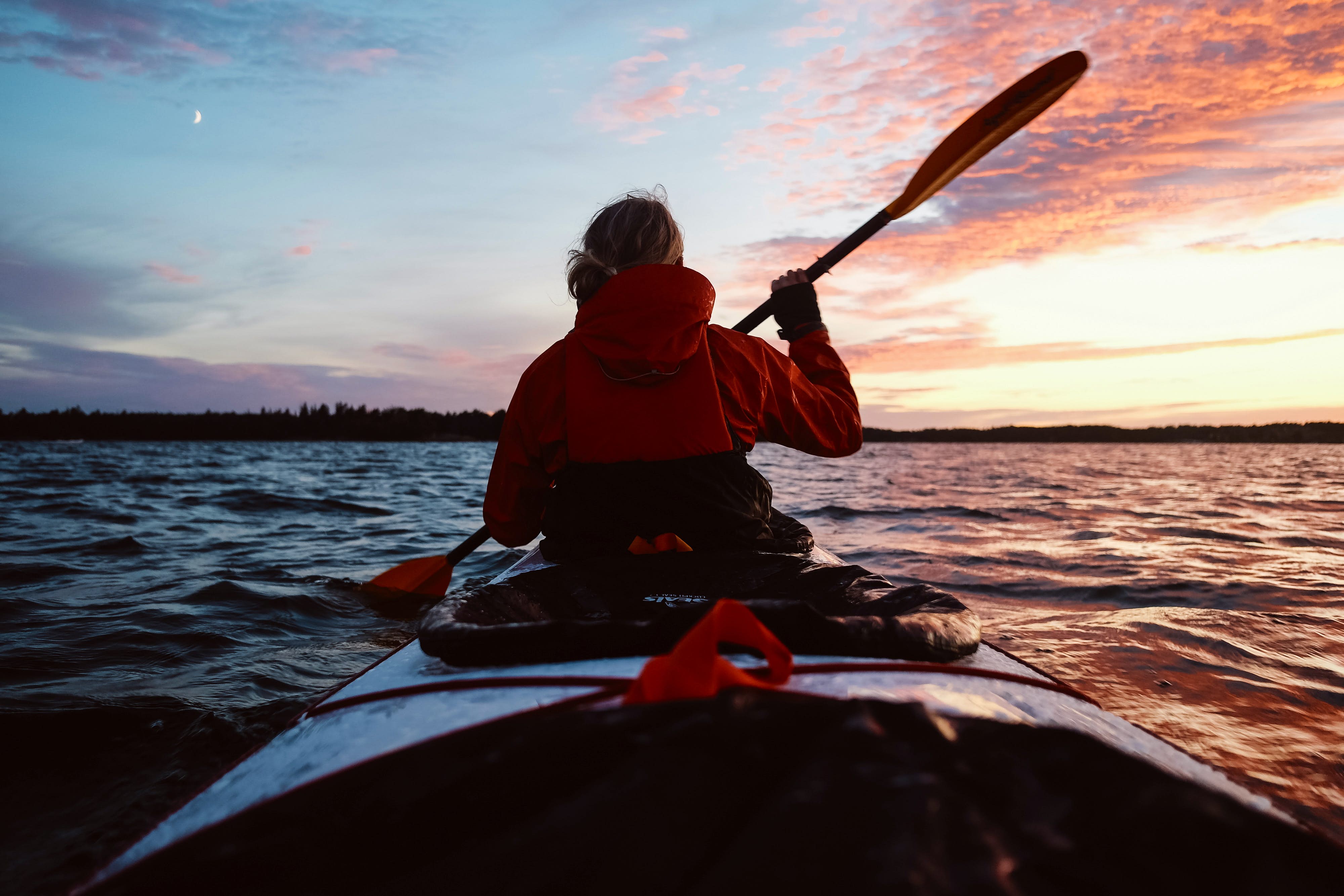 Day 4: A wood-fired sauna on the sea

Some of the area's most dramatic scenery awaits you today. A strait takes you alongside steep rock walls, which is very unsusal for this archipelago. You’ll head towards Håskö, where you can visit the small-scale fishing operation, renowned for their hot-smoked fish and fresh deboned perch.

There is a self-served wood-fired sauna right by the waterfront, which you can use with a small fee paid to the locals for wood. Afterwards a paddle and half-hour hike takes you to Gubbö navigation point - it's been used by seafarers for centuries. You’ll get a fantastic view of the surrounding islands, and White-tailed eagles and Ospreys are often seen soaring past! 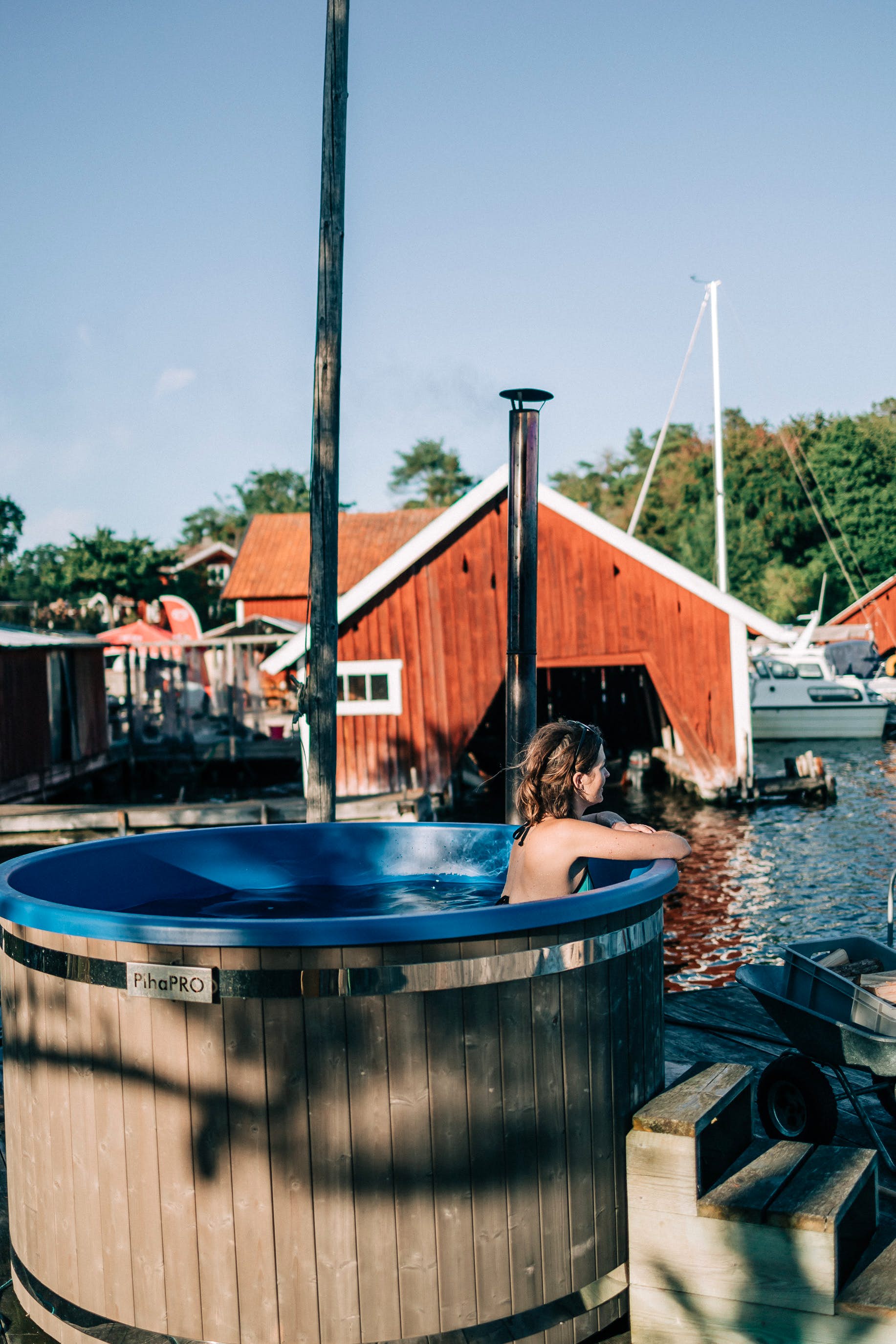 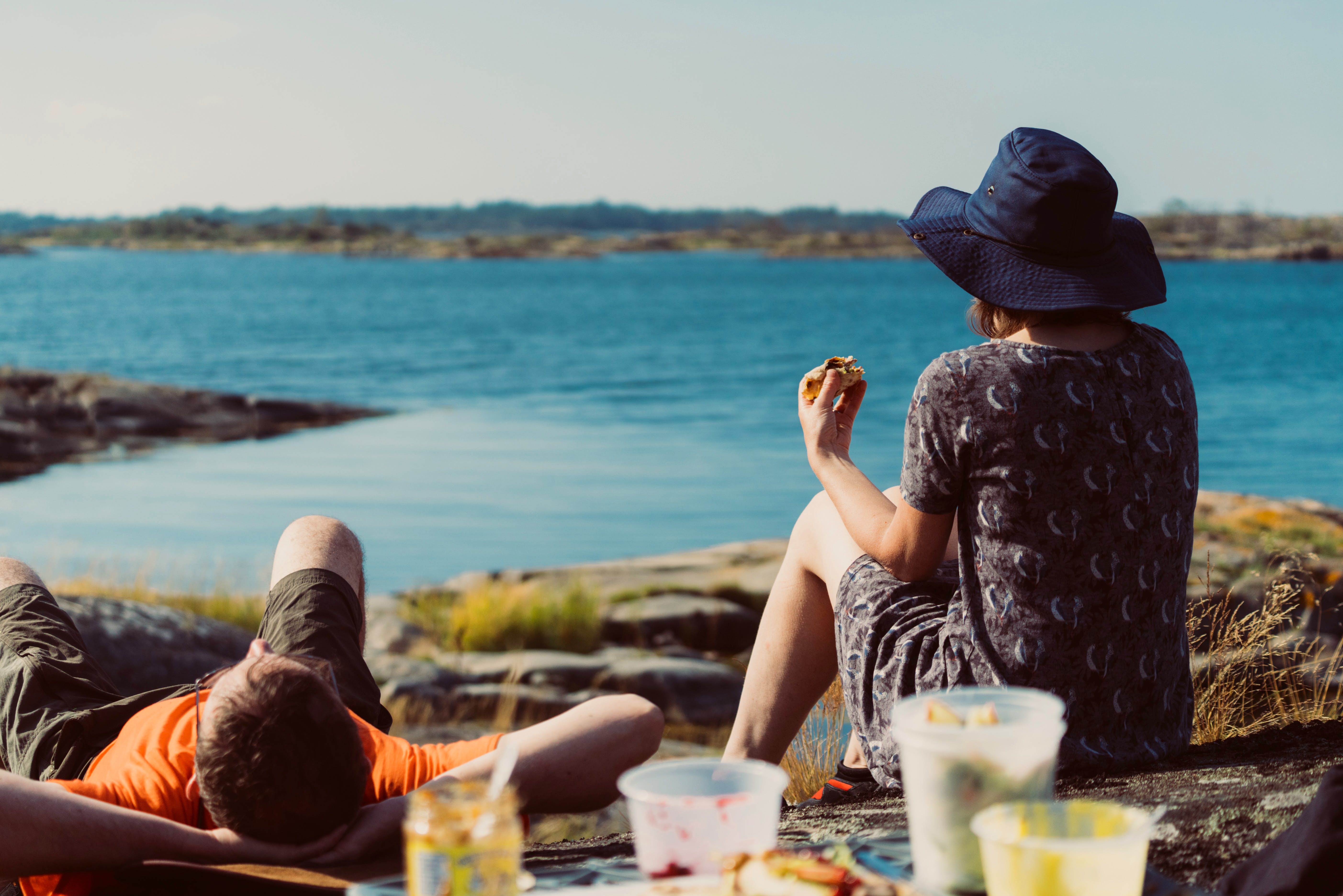 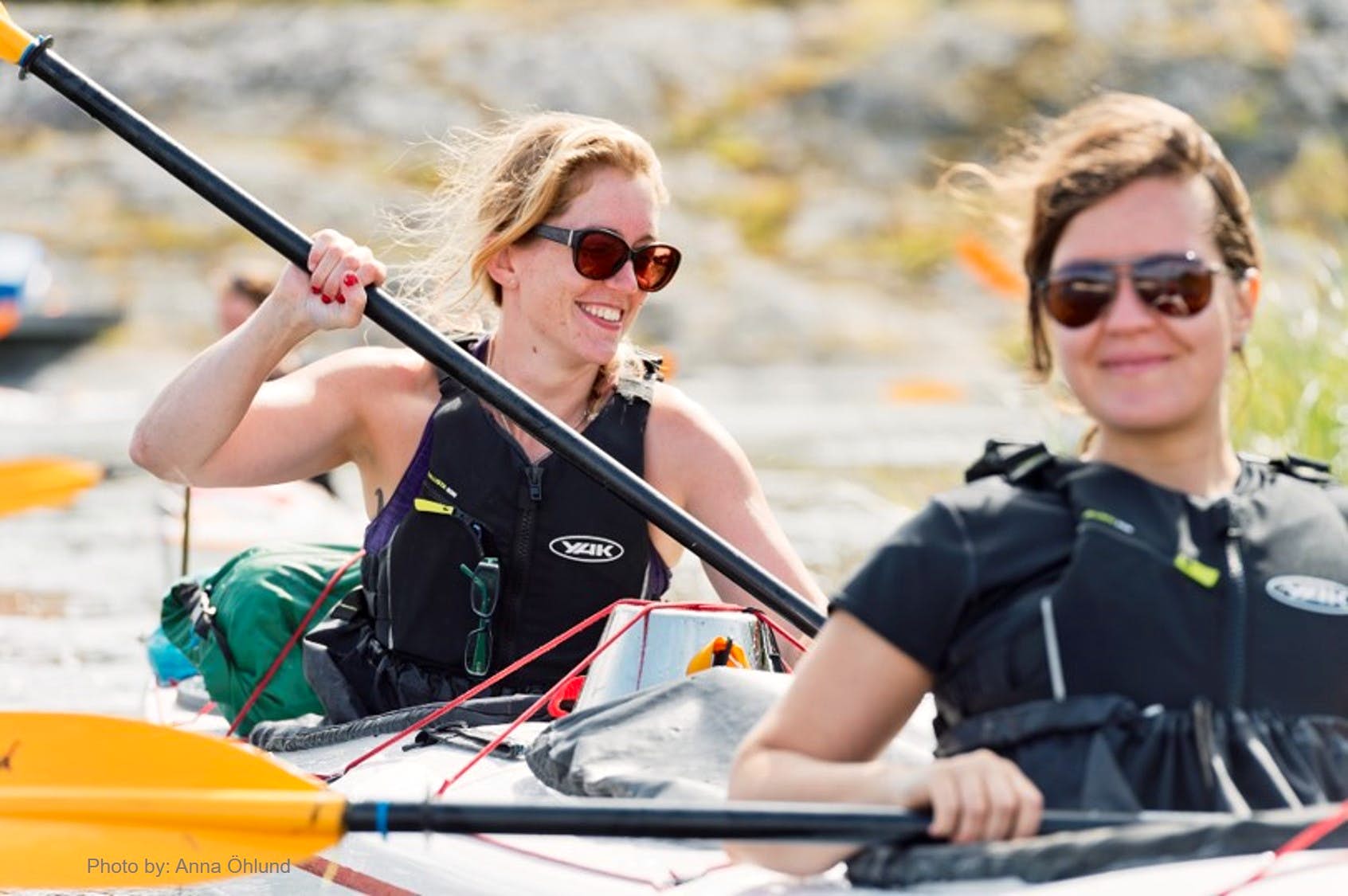 Day 5: The abandoned copper mine

It's time to wake up for your final day in this Swedish island wonderland. After a hearty breakfast you head to the abandoned copper mine on Fångö island. During the 19th century, this was a prominent site for mining copper and there are many remains from this era still – deep mining shafts, massive piles of waste rock and old house foundations. Head around the island and kayak through the tiny canal that takes you opposite Fyrudden. Cross a small strait westward, and you reach the mainland and the endpoint of your journey.

Unload the kayaks at the dock, wander the marina, eat some ice-cream, and start reminiscing. You have just completed an impressive kayaking expedition all by yourselves in a truly wild coastal landscape!

You will be dropped back off at your hotel, or Norrkoping train station at 5 pm. 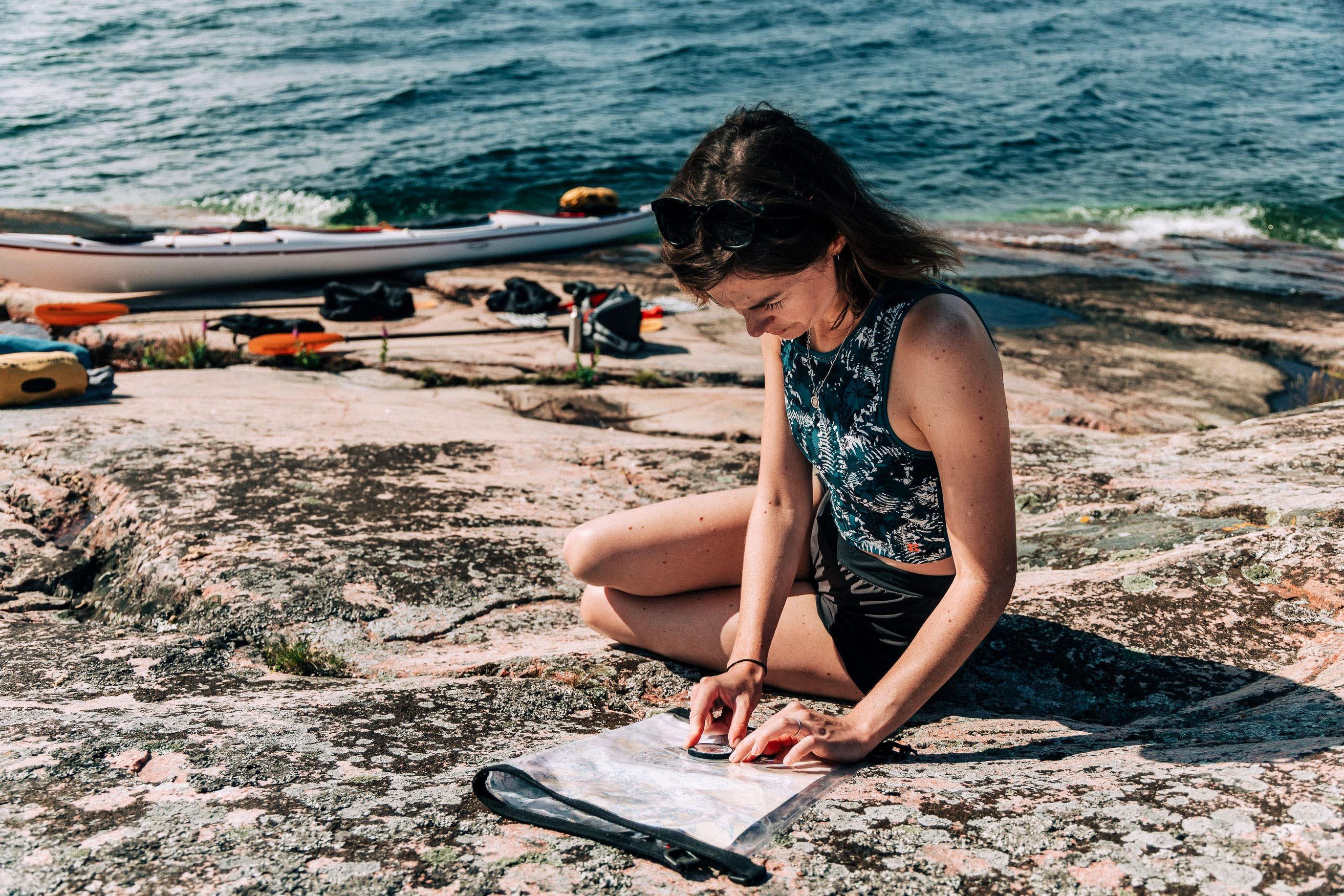 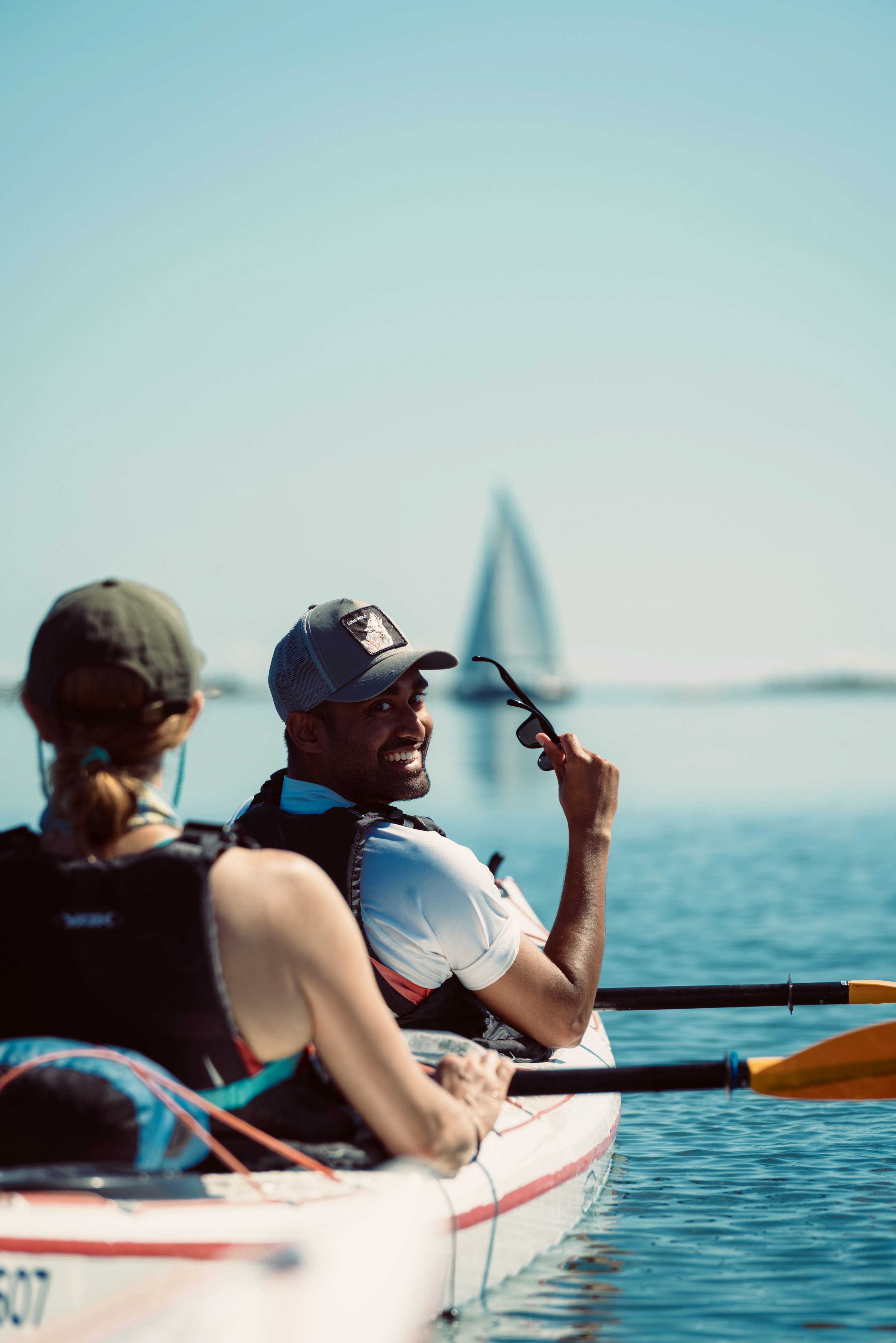 What is included in the price?

Where is the start and end point?

Start: You'll be collected by your host at your Norrkoping hotel or Norrkoping train station at 10 am on day 1 of our itinerary.

End: You'll be transferred back to Norrkoping train station, or your hotel by 5 pm on day 5 of your itinerary.

Can I book alone?

For safety reasons, you must book this trip with a minimum of 2 people. We don't want you to miss out, so we have created a Facebook group to meet other solo travellers here: https://www.facebook.com/groups/446247419648730/

What fitness/experience do I need?

You do not have to be especially fit to go sea kayaking, nor do you need previous experience. Kayaking is quite easy, and the boats go surprisingly fast with little effort. You decide your own pace and how much distance you wish to cover - the above itinerary is just an example.

You must be able to swim and have a taste for adventure. Weight limit; 120 kilos per person. Beginners are welcome! Double kayaks are used for beginners and intermediates.

Can we camp anywhere we want?

Yes, as long as you are respectful to land, wildlife and people. Although some of the islands have the odd traditional red and white little house, the absolute majority are wild, unexploited and uninhabited.

How do I find my way around the islands?

It’s an interesting challenge to navigate around the islands. Your host will teach you the basics of navigating in the area. After a little trial and error, even the novice navigator excels at following routes and recognising landmarks.

You are provided a deck compass strapped to the front of your kayak, which makes it easy to see which direction you’re going in.

The whole area has phone reception, so if you are unsure you can always use a little google maps assist.

What should I do in an emergency?

You are provided a cell phone with pre-programmed numbers. The whole area has reception, so if something happens you're only a phone call away from help. You can be reached by boat in under 30 minutes. Kayaking related emergencies are exceedingly rare.

Weather in the Archipelago changes often and quickly. A summer day can bring you 33°C and sunshine, or 17°C and rain, but mostly it stays around 20–28°C. Expect some calm, hot and sunny days, and a couple of overcast, windier ones. Sometimes it rains, but it usually passes pretty quickly. Your host will text you the weather report every morning so you're prepared.

Water temperature depends on the weeks leading up to summer. Typical ranges are 14–19°C in early summer and autumn, and 19–24°C during peak summer.

Will we be with other people?

You will be transferred by minibus with some other the other groups, and be briefed together. After that, each group heads off on their own adventure. Minimum group size 2 people.

Can I bring my own gear?

Yes, sure! We do recommend using the host equipment though. It's very high quality and has been carefully selected for the conditions in the area.

What is the minimum age for this trip?

The minimum age is 12, provided they are accompanied by a parent or guardian

Is there somewhere to store my luggage?

Yes. You get to repack your clothing and personal items into dry bags at the start point. Your host will store your luggage safely at the base and bring it to your endpoint on your last day.

What is the food situation?

You will order everything in advance through a very comprehensive food ordering system and pay cost price, the same as in the supermarket. Your food is packed and ready to go when it’s time to start. Food for a 5 day trip usually adds up to 50–70 euros per person depending on how lavish you wish be. Alcohol is additional. The larger the group, the smaller the individual cost.

You will be provided with enough fresh water to last the first half of the trip, and shown a few places where you can fill up on the way.

Can I spend an extra day in Stockholm before/after my trip?

Another great option if you’re flying into Stockholm Arlanda is to spend the night in Stockholm city (20 mins from airport), and take the train to Norrkoping in the morning (1 hour 45 mins).

Which airport should I fly to/from?

You can fly to:

What kit should I bring?
What kit will be provided?
When is the best time to go?

The warmer summer months are May-Sep, so we only run trips during those dates. Please note the establishments on Harstena are only open from June 19–August 23.

Late May to mid-June
When the seasons starts, early summer is in its pride – it’s incredibly green with lots of flowers. The archipelago is full of proud bird moms swimming around with their little chicks. Days are really long and it barely gets dark at all.
Pros: Very green and lush, lots of bird wildlife, crazy long hours of daylight
Cons: Water usually does not get swimmable until late June, can be windy, most establishments in the area closed until Midsummer

Late June to mid-August
The prime summer months in Sweden and your best bet for sunny and warm days. By now the water is a little warmer – you may get some glorious days sunbathing on a flat skerry in the outer archipelago. Although still solitary while camping & kayaking, there may be bustling activity of sailers, boaters and kayakers at the different hubs of the area.
Pros: Beautiful sunny weather, swimmable water, long hours of sunlight, all establishments in the area open
Cons: Conditions may get very windy, some mosquitos, less solitude in some areas of the archipelago

Late August to mid-September
By late August you will probably be blessed with calmer weather but you won’t see as many flowers and birds. September is regarded by many as the best month to go sea kayaking in Sweden. It’s starting to get a bit cooler but late summer weather is usually very stable. There is a good chance of mirror-calm water for several days. Late summer sunsets last for hours and are absolutely amazing!
Pros: Fantastic calm days, long colourful sunsets
Cons: Most establishments close end of August, chillier water even though it usually stays swimmable at least a week into September. Many bird species have migrated south.

Late September
As autumn arrives to the archipelago, the leaves turn beautiful bright red and yellow colours. The air is crisp and the sun is low, creating a lovely golden light. The stillness is palpable – no one around except locals carrying on their daily lives on the islands. Bring your long johns and a warm beanie, and preferably have some kayaking and camping experience.
Pros: Beautiful, crisp autumn weather, incredible solitude.
Cons: Water starting to get cold, if unlucky, can be wet and windy.

Provided by Do The North